Horatio P. Spafford (1828-1888) was a wealthy Chicago attorney.  He made a lot of money, invested it wisely in real estate, and was one of the wealthiest men in a city that was rising fast after the Civil War.  Then, in 1871, the great Chicago fire consumed much of the city, and, most of Spafford’s great wealth.  About that same time, his only son, age four, died of scarlet fever.  Spafford dealt with his grief by pouring himself into his work, working feverishly at rebuilding the city and assisting the 100,000 people who had been left homeless.

In 1873, after two years of hard work, Spafford needed a vacation.  He decided to take his wife and four daughters on a trip to Europe.  They had their reservations made on a luxurious French liner, but urgent business delayed Spafford in New York.  He sent his wife and four daughters on ahead, promising he would join them soon.  In the middle of the night, November 22, 1873, another ship crashed into the side of the French liner, and within two hours the liner had sunk into the icy North Atlantic.  226 passengers were drowned.  Only 47 survived.  Mrs. Spafford was found, nearly unconcious, clinging to a piece of debris.  All four daughters perished (ages 11, 9, 5, and 2).  Mrs. Spafford cabled her husband a message (see below) which began: “Saved alone.  What shall I do?…”  To lose one child is a stab in the heart– imagine what it must have been like to lose one, and not long after, the other four, all at once. 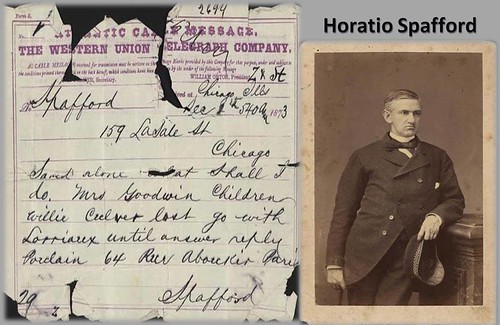 Horatio Spafford left New York as soon as possible to rejoin his wife.  One night while enroute, the captain called him aside and said, “We are now passing over the spot where the ship went down.”  Spafford could not sleep that night, but sat up thinking and praying and writing.  He wrote over and over again, perhaps trying to convince himself, he wrote, “It is well, it is well, it is well with my soul.”  He kept working with that thought, and then later added the words that became a much loved humn.  Out of such tragedy and sadness, Horatio Spafford was able to write this incredible hymn of peace and comfort and hope.  “When peace like a river attendeth my way, and sorrow like sea billows roll, Whatever my lot, thou hast taught me to say, It is well, it is well, with my soul.”  On the outside, everything was not well, everything was sad and lonely.  But still, says the hymn, “It is well with my soul.

The great melody that goes so very well with these words was composed by Phillip Bliss, a writer of many familiar melodies.  Not long after he wrote this tune, he and his wife were killed in a train wreck in Ohio.  The story behind this hymn is filled with tragedy, but that only serves to reinforce the message.  All can go terribly wrong, but still, all can be well with one’s soul, that soul that remains in God’s good hands forever.

Psalm 34:18  —  The Lord is close to the brokenhearted and saves those who are crushed in spirit.

Matthew 11:28-30  —  (Jesus said), “Come to me, all you who are weary and burdened, and I will give you rest.  Take my yoke upon you and learn from me, for I am gentle and humble in heart, and you will find rest for your souls.  For my yoke is easy and my burden is light.”

3 John 1:2  —    Dear friend, I pray that you may enjoy good health and that all may go well with you, even as your soul is getting along well.

IT IS WELL WITH MY SOUL

When peace, like a river, attendeth my way,
When sorrows like sea billows roll;
Whatever my lot, Thou hast taught me to say,
It is well, it is well with my soul.

Though Satan should buffet, though trials should come,
Let this blest assurance control,
That Christ hath regarded my helpless estate,
And hath shed His own blood for my soul.

My sin, oh the bliss of this glorious thought!
My sin, not in part but the whole,
Is nailed to His cross, and I bear it no more,
Praise the Lord, praise the Lord, O my soul!

For me, be it Christ, be it Christ hence to live:
If Jordan above me shall roll,
No pang shall be mine, for in death as in life
Thou wilt whisper Thy peace to my soul.

But, Lord, ’tis for Thee, for Thy coming we wait,
The sky, not the grave, is our goal;
Oh, trump(et) of the angel! Oh, voice of the Lord!
Blessed hope, blessed rest of my soul!

And Lord haste the day, when the faith shall be sight,
The clouds be rolled back as a scroll;
The trump shall resound, and the Lord shall descend,
Even so, it is well with my soul.

Hear this hymn sung by a ‘choir’ of one at: