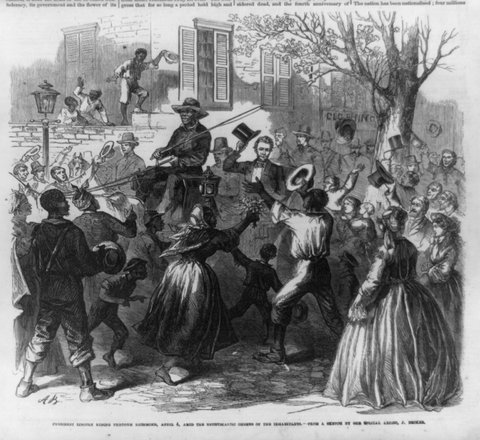 On April 9, 1865 Confederate General Robert E. Lee surrendered to the Union forces General Ulysses S. Grant, thus ending the Civil War and the most terrible four years of American history.  It was Palm Sunday, 150 years ago.

Earlier that week, Monday, April 3rd, Union Forces entered the city Richmond, Virginia, the capitol of the South.  Confederate President Jefferson Davis and the rest of the Southern leadership had fled the city, all the soldiers had either moved out or were captured, and Richmond was securely in the control of the occupying Union forces.  President Abraham Lincoln had been in the area for several days already, visiting the army.  Now, with the city in Union hands, Lincoln said he wanted to go into Richmond.

Tuesday morning, April 4th, a small contingent of soldiers brought Lincoln down the James River, and the President entered the city.  He began walking the streets without fanfare.  Then he was recognized.  Several black workers, now freed from slavery, ran out to meet him.  Then some black women, also enjoying their first day of freedom, ran out to join the procession.  Soon, many other freed slaves joined them, all shouting, “Glory Hallelujah, Massa Lincoln, Glory Hallelujah.”

Some of the former slaves began to kneel before Lincoln in humble praise and gratitude.  At this, Lincoln paused and motioned for them to rise.  He said, “Don’t kneel to me.  You must kneel only to God and thank him for your freedom.  Liberty is your birthright.  God gave it to you as he gave it to others, and it is a sin that you have been deprived of it for so many years.”  The triumphant procession continued through the city.  It was a great day of joy and vindication for Abraham Lincoln.  The previous four years were filled with heartache and frustration and death and grief, as Lincoln led the nation during the four year war to preserve the union and to end slavery.  This was a great day of freedom and victory for this man who endured so much agony.  Five days later, was the final surrender of Lee to Grant at Appomattox.  Five days after that, President Lincoln was assassinated.

Our Palm Sunday worship services remember the story of another triumphant procession.  Jesus, the great preacher and healer who had been ministering throughout the countryside, was coming into the big city of Jerusalem.  Jesus, the friend of the poor, the lover of sinners, the miracle worker, the wise, but controversial teacher; this Jesus was coming to the capitol city.  He was received like a king, with robes and palm branches spread on the path before him so not even the feet of his donkey had to touch the ground.  And everyone was praising him and shouting “Hallelujah!”  Five days later, Jesus was killed, and all his followers were plunged into despair.

On Easter Sunday Jesus rose from the dead, and that meant our freedom from our bondage to sin and death.  That resurrection meant new life for all who believe in Jesus, now and forever.

The story of Abraham Lincoln in April of 1865 is an incredible story and his leadership, suffering, sacrifice, and death; and it meant freedom for four million slaves.   But the life and death and resurrection of Jesus means the offer of freedom from sin and death for everyone who ever lived.  We must never allow the familiarity of this story blind us to its glory and wonder and eternal significance.

John 12:12-15  —  The next day the great crowd that had come for the festival heard that Jesus was on his way to Jerusalem.  They took palm branches and went out to meet him, shouting, “Hosanna!”  “Blessed is he who comes in the name of the Lord!”  “Blessed is the king of Israel!”  Jesus found a young donkey and sat on it, as it is written:  “Do not be afraid, Daughter of Zion; see, your king is coming, seated on a donkey’s colt.”

Almighty God, on this day, your son Jesus Christ entered the holy city of Jerusalem and was proclaimed King by those who spread garments and palm branches along his way.  Let those branches be for us signs of his victory, and grant that we who bear them in his name may ever hail him as our Lord, and follow him in the way that leads to eternal life.  In his name we pray.  Amen.