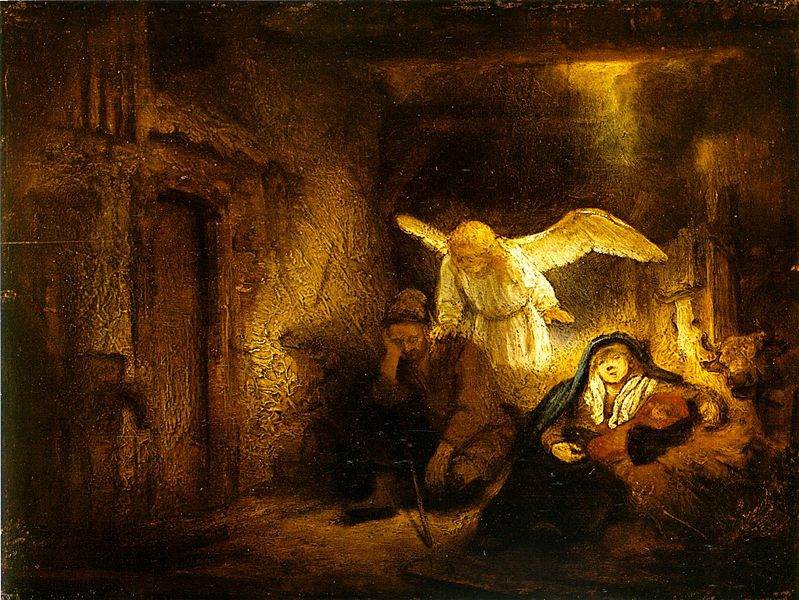 There are four Gospels in the New Testament, four accounts of the life of Jesus Christ by four different men.  But only two of the four tell the story of Christmas.  The Gospels of Mark and John don’t even mention it.  Only Luke and Matthew tell of the birth of Jesus, and they, from two very different perspectives.  Matthew and Luke do not contradict each other, but they do tell different parts of the story.  For example, Matthew tells us all about the visit of the three Magi, whereas they do not even appear in Luke.  Luke, on the other hand, tells us all about the shepherds and the angels in the sky and the baby lying in a manger, and not a word of any of this appears in Matthew.  But the primary difference I want to describe is the different personal perspective each takes in the telling of the story.

Luke tells the story of Jesus’ conception and birth entirely from Mary’s perspective, and Matthew tells the story entirely from the perspective of Joseph.  It is Luke that describes the visit of the angel to Mary, and Luke records Mary’s words of obedience, and Luke tells the story of Mary’s visit to her cousin Elizabeth, the mother of John the Baptist.  When the shepherds appear in Luke, it is Mary who ‘ponders all these things in her heart.’  Twelve years later, when the boy Jesus, who was missing, is found in the temple, it is Mary who does all the talking, and Mary who again, ‘treasures all these things in her heart.”  Throughout the first three chapters of Luke the focus is on Mary, and Joseph is in the background.  Even the other characters in the story seem to ignore Joseph.  When Mary and Joseph take the 8-day old Jesus to the temple, the old man Simeon takes Jesus into his arms and blesses him and then turns and speaks to Mary.

Not so in Matthew, where the focus is on Joseph.  In Matthew, Mary has the baby, but that’s about it.  Matthew 1:18-25 tells of the same incredible situation as in Luke:  Mary is found to be with child even though she is still a virgin.  This needs some explanation, and so an angel appears to Joseph.  Luke tells about when the angel appeared to Mary and how she obeyed.  Matthew tells about when the angel appeared to Joseph and how he obeyed, agreeing to take the pregnant Mary as his wife.  In Matthew, Joseph is the one given the responsibility to give Jesus his name.

Then comes the visit by the Magi, followed by the threat of Herod, seeking to kill all the newborn boys in Bethlehem.  God warns the Holy Family to flee, and he does so through a dream in which an angel appears to Joseph.  So Joseph protected the family by taking them and fleeing to Egypt.  After two years there, Herod died, and they are finally allowed to return home.  Again, it is Joseph who is informed of this in a dream, and Joseph who leads his family home, and Joseph who receives yet another dream warning him of dangers along the way.  None of this is mentioned by Luke.

Let’s look closer at the story from the perspective of Joseph as described by Matthew.  Sometimes the Bible will give more details than most people are looking for, as in the descriptions of Old Testament ceremonial laws and long lists of family histories.  Other times, it would be nice to be told a bit more.  The story of Joseph is one of those times.  He was clearly a godly and noble man who obeyed God in a difficult situation.  But there is not a single word spoken by Joseph in any of the Gospels, not even in Matthew.  We can only wonder what he thought about all what happened to him.  Let’s read between the lines a little bit and imagine Joseph’s situation.

Joseph was no doubt a respected man in the local synagogue.  The Bible notes how carefully he observed all the ritual laws for temple sacrifice and ritual purification, and, the circumcision and naming of Jesus on the prescribed eighth day.  In fact, Matthew calls him a “righteous man.”

Then, through no fault of his own, Joseph finds himself in a very difficult and painful situation.  The woman to whom he is engaged to be married tells him that she is pregnant, and he knows that he is not the father.  In those days, the man’s word and authority were absolute and so he, by law, could have had Mary stoned to death for adultery.  But Joseph did not want to expose her to public disgrace, much less execution.  However, to continue the relationship under those circumstances was unthinkable for an upright Jew, so he decided to divorce her quietly.  They were at this point still only engaged, but in those days, an engagement was also a legally binding pledge, and the same word, divorce, was used when even this pledge to be married was broken.  And so Joseph would simply end the relationship quietly.  Joseph was wronged and deeply hurt and he could have said much around Nazareth, increasing the difficulty for Mary and to her family.  But he chose to say nothing and do nothing to harm anyone.  That was the kindest and most gracious thing that a good man could do in that situation.  Joseph was a good man, kind and forgiving.  (continued…)

Matthew 1:19  —  Her husband Joseph, being a righteous man and unwilling to expose her to public disgrace, planned to dismiss her quietly.

Matthew 1:20-21…24  —  But after he had considered this, an angel of the Lord appeared to him in a dream and said, “Joseph son of David, do not be afraid to take Mary home as your wife, because what is conceived in her is from the Holy Spirit.  She will give birth to a son, and you are to give him the name Jesus, because he will save his people from their sins…”  When Joseph woke up, he did what the angel of the Lord had commanded him and took Mary home as his wife.

Matthew 2:13  —   When they had gone, an angel of the Lord appeared to Joseph in a dream.  “Get up,” he said, “take the child and his mother and escape to Egypt.  Stay there until I tell you, for Herod is going to search for the child to kill him.”

Lord, let your glory by my goal, your word my rule, and then your will be done.