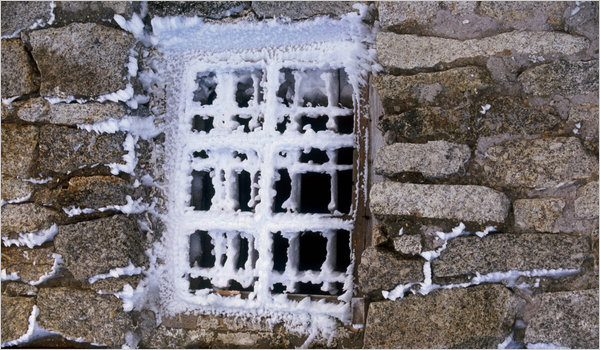 (…continued)  For 26 years Aksyónof lived as a convict in Siberia.  His hair turned white as snow and his beard grew long, thin, and grey.  All his mirth went; he stooped; he walked slowly, spoke little, and never laughed, but he often prayed.

In prison Aksyónof learnt to make boots, and earned a little money, with which he bought The Lives of the Saints.  He read this book when there was light enough in the prison; and on Sundays in the prison-church he read the lessons and sang in the choir; for his voice was still good.

The prison authorities liked Aksyónof for his meekness, and his fellow-prisoners respected him.  They called him ‘Grandfather,’ and ‘The Saint.’  When they wanted to petition the prison authorities about anything, they always made Aksyónof their spokesman, and when there were quarrels among the prisoners they came to him to put things right, and to judge the matter.

No news reached Aksyónof from his home, and he did not even know if his wife and children were still alive.

One day a fresh gang of convicts came to the prison.  In the evening the old prisoners gathered round the new ones and asked them what towns or villages they came from, and what they were sentenced for.  Among the rest Aksyónof sat down near the new-comers, and listened with downcast air to what was said.

One of the new convicts, a tall, strong man of sixty, with a closely-cropped gray beard, was telling the others what he had been arrested for.   “Well, friends,” he said, “I only took a horse that was tied to a sled, and I was arrested and accused of stealing.  I said I had only taken it to get home quicker, and had then let it go; besides, the driver was a personal friend of mine.  So I said, ‘It’s all right.’  But they said, ‘No, you stole it.’  But once I really did do something wrong, and by rights I ought to have come here long ago.  But that time I was not found out.  Now I have been sent here for nothing at all.”

“Where are you from?” asked some one.

“From Vladímir,” he said.  “My family are of that town.  My name is Makar, and they also call me Semyónitch.’

Aksyónof raised his head and said:  ‘Tell me, Makar, do you know anything of the Aksyónof family?  They were merchants in Vladímir.  Are they still alive?”

“Know them?  Of course I do,” Makar said.  “The Aksyónofs are rich, though their father is in Siberia– a sinner like ourselves, it seems.  As for you, Gran’dad, how did you come here?”

Aksyónof did not like to speak of his misfortune.  He only sighed, and said, “For my sins I have been in prison these twenty-six years.”

But Aksyónof only said, “Well, well; I must have deserved it!”  He would have said no more, but his companions told the new-comer how Aksyónof came to be in Siberia; how someone had killed a merchant and had put a knife among Aksyónof’s things, and Aksyónof had been unjustly condemned.

When Makar heard this, he looked at Aksyónof, slapped his own knee, and exclaimed, “Well, this is wonderful!  Really wonderful!  But how old you’ve grown, Gran’dad!’

The others asked him why he was so surprised, and where he had seen Aksyónof before; but Makar Semyónitch did not reply.  He only said: “It’s wonderful that we should meet here, lads!”

These words made Aksyónof wonder whether this man knew who had killed the merchant, so he said, “Perhaps, Makar, you have heard of that affair, or maybe you’ve seen me before?”

“How could I help hearing?  The world’s full of rumors.  But it’s long ago, and I’ve forgotten what I heard.”

“Perhaps you heard who killed the merchant?” asked Aksyónof.

Makar laughed and replied, “It must have been him in whose bag the knife was found.  And if some one else hid the knife there, well, as the old saying goes, ‘He’s not a thief till he’s caught.’  How could any one put a knife into your bag while it was under your head?  It would surely have woke you up?”

When Aksyónof heard these words, he felt sure this was the man who had killed the merchant.  He rose and went away.  All that night Aksyónof lay awake.

He felt terribly unhappy, and all sorts of images rose in his mind.  There was the image of his wife as she was when he parted from her to go to the fair.  He saw her as if she were present.  Her face and her eyes rose before him, and he heard her speak and laugh.  Then he saw his children, quite little, as they were at that time; one with a little cloak on, another at his mother’s breast.  And then he remembered himself as he used to be– young and merry.  He remembered how he sat playing the guitar in the porch of the inn where he was arrested, and how free from care he had been.  He saw, in his mind, the place where he was flogged, the executioner, and the people standing around; the chains, the convicts, all the twenty-six years of his prison life, and his premature old age.  The thought of it all made him so wretched that he was ready to kill himself.

“And it’s all that villain’s doing!” thought Aksyónof.  And his anger was so great against Makar Semyónitch that he longed for vengeance, even if he himself should perish for it.  He kept repeating prayers all night, but could get no peace.  During the day he did not go near Makar, nor even look at him.

A fortnight passed in this way.  Aksyónof could not sleep at nights, and was so miserable that he did not know what to do.  (continued…)

Isaiah 30:18  —  The Lord longs to be gracious to you; therefore he will rise up to show you compassion.  For the Lord is a God of justice.  Blessed are all who wait for him!

Forgive us our sins, as we forgive those who sin against us.