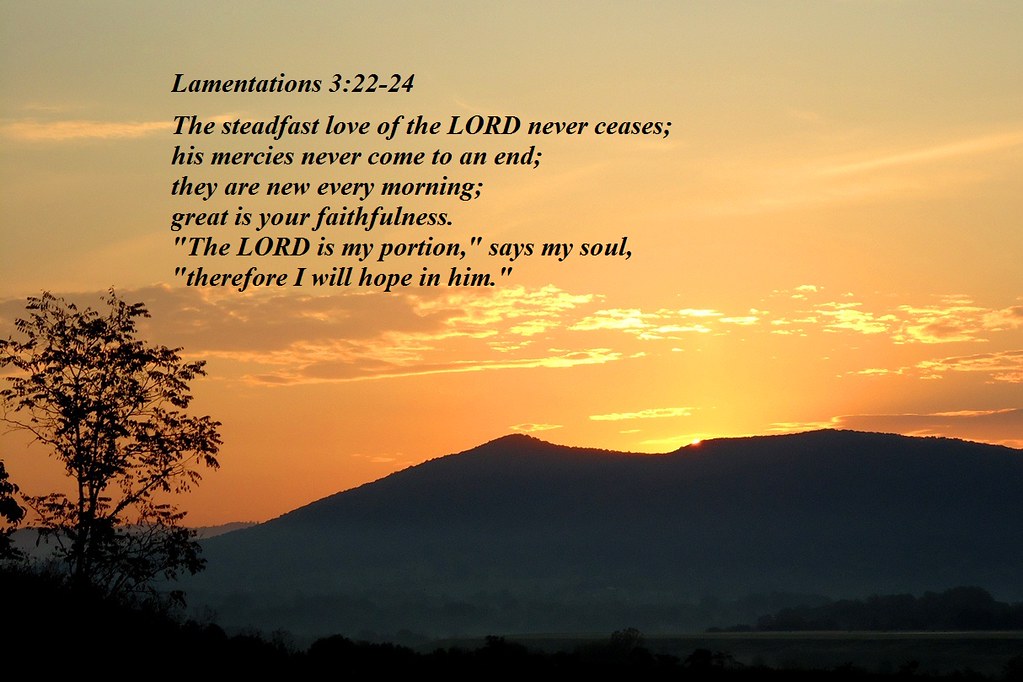 In John chapter 16, Jesus is spending his last evening with his disciples before his crucifixion.  The disciples don’t know yet what is coming, but Jesus is helping preparing them for a huge disappointment.  Jesus said to them, “In a little while, you will see me no more” (he would die on the cross and be buried);  “and then,” Jesus said, “after a little while, you will see me” (when he rose from the dead).  But even after the resurrection, the time would be brief and Jesus would go to heaven.  They again would be left alone, without him.  Jesus went on to predict that they would grieve and weep and mourn— but then in the end, their grief would turn to joy.  Jesus then said, “I have told you these things so that in me you may have peace.  In this world you will have trouble.  But take heart, for I have overcome the world.”  Jesus was preparing them for the shattering of many of their hopes:  he would no longer be with them, they would face great suffering as they took his message to the world, many people would reject their message, and most of those disciples would be killed.  But Jesus was offering them a hope and a help that went beyond this world and this life.  Jesus was assuring them that even though many of their earthly hopes would be disappointed, their ultimate and eternal hope in him would never be disappointed.

Malcom Muggeridge was a British journalist who recorded the rising and falling of many 20th century political leaders, and the failure of their hopes for a better world.  For much of his life he was an unbeliever.  But late in life Muggeridge began writing about his fascination with Jesus, and at the age of 79 joined the Roman Catholic Church.  Describing two very different kinds of hope, Muggeridge wrote:

As Christians, we need not be discouraged when we see all around us the decay of institutions and powers, when we see empires falling, when we see the economy is such disarray, and when we see social program after program fail, or worse yet, create more problems.  That all need not lead us to despair.  Rather, it is precisely when every earthly hope has been tried and found inadequate, when every possible help from man has been sought and come to nothing, when every recourse this world offers has been explored and attempted to no effect, when the last ray of light and hope has gone out, and we are left in darkness—It is then, that Christ’s hand reaches out sure and firm.  Then Christ’s words bring their soothing comfort, and then his light shines the brightest, abolishing the darkness forever.  Thus, finding in everything else only failure and decay and anxiety, our soul is driven back to God.  (The End of Christendom, 1980, page 56)

That is a good quote to keep in mind this election year.

Muggeridge echoes the words of Paul who, during a difficult time in his life, wrote:  “We were under great pressure, far beyond our ability to endure, so that we despaired even of life itself.  Indeed, we felt we had received the sentence of death.  But this happened so that we might not rely on ourselves but on God, who raises the dead…  We have placed our hope in him that he will save us”  (II Corinthians 1:8-9…10b).

Now, just in case none of this applies to you, and all of your hopes and dreams are being fulfilled and everything is going well for you, that’s great, praise God from whom all blessings flow.  And if you believe the fulfillment of all your hopes and dreams is still in the future and you are working hard toward those goals, then by all means go for it, as Paul says in Colossians 3:23, “Whatever you do, work at it with all your heart, as working for the Lord.”

But at the same time, do not get your entire faith, hope, and well-being wrapped up in the things of this world.  It is easy to fall into that trap.  Remember that whatever you have or get will be only for the time being.  So when the disappointments come, as they always do, remember that one hope that will not disappoint you.  And when everything you ever hoped for and worked for is slowly stripped from you by old age or failed health– remember, that if your deepest hope is in Jesus, the best is still yet to come.  And even in those times at the cemetery when it seems all hope is gone, we are still not out of hope, for it says in God’s Word, “Whether we live or die, we belong to the Lord” (Romans 14:8b).

So be ready to give up on all your false and temporary hopes– you fill feel much better.  But don’t give up on your hope in Jesus; and you will be all right, now and forever.

“I lift up my eyes to the hills—where does my help come from?  My help comes from the Lord, the maker of heaven and earth.”

Lamentations 3:25-26  —  The Lord is good to those whose hope is in him, to the one who seeks him; it is good to wait quietly for the salvation of the Lord.

Zechariah 9:10  —  “Return to your fortress, you prisoners of hope; even now I announce that I will restore twice as much to you.”

Ecclesiastes 12:13  —  Now all has been heard; here is the conclusion of the matter:  Fear God and keep his commandments, for this is the duty of all mankind.

Our hearts are restless, O Lord, until they can find their rest in you.