Many Mid-East nations have (or, once had) significant Christian minorities.  Many of the refugees you see on the news are Christians fleeing not only the wars, but genocidal persecution specifically targeting them as Christians.  Recent victories by the  Iraqi army over ISIS forces have allowed some of these Christians to return home.  The fifteen photos below illustrate the destruction done to their places of worship.  Some of them also show these Christian brothers and sisters worshiping again in their ruined churches.  Think about them tomorrow morning as you worship in peace and safety, and remember them in your prayers.

If you have trouble viewing the images on your email, go to my website at:

In August of 2014, ISIS militants swept through towns near Mosul, Iraq, taking control and forcing thousands to flee.  Among the towns was Qaraqosh, which was Iraq’s largest Christian city with a population of 50,000.  For more than two years, occupying ISIS jihadists tried to erase any evidence of Christianity from Qaraqosh— burning churches, destroying icons and statues, toppling bell towers, and more.  Qaraqosh was retaken by Iraqi forces in October of 2016, but the city remains almost completely deserted.  Little by little, some residents who were forced to flee have been returning to recover what belongings remain, to assess the damage to their property, and to attend church services and holidays.  Only a handful of families have moved back to the city so far, still fearing for their security, as Iraqi forces continue to battle ISIS in nearby Mosul.

A Syriac Christian militiaman stands guard on top of the Saint John’s church (Mar Yohanna) during an Easter procession in the nearly-deserted predominantly Christian Iraqi town of Qaraqosh (also known as Hamdaniya), some 30 kilometers from Mosul, on April 16, 2017. 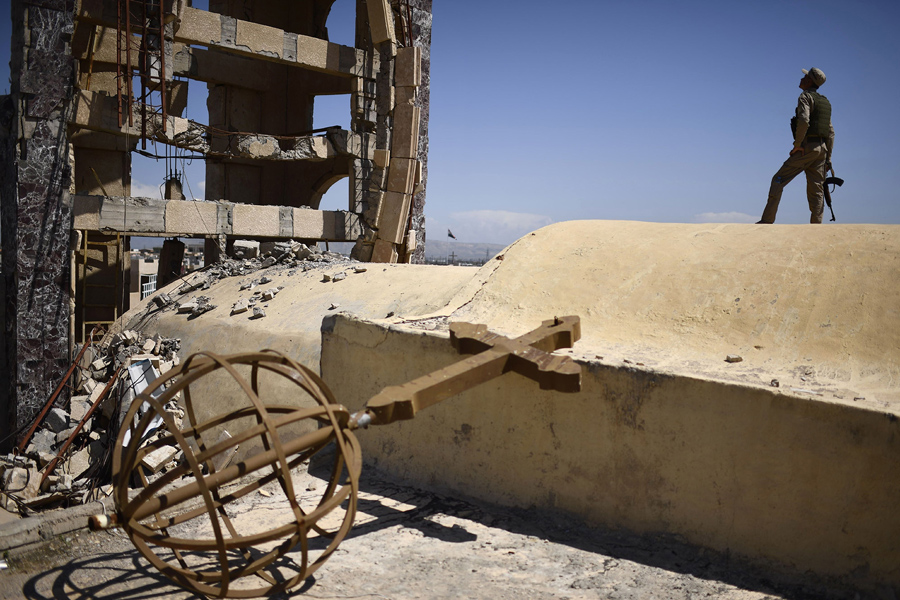 A fighter from the NPU (Nineveh Plain Protection Units) walks through a destroyed church on November 8, 2016 in Qaraqosh, Iraq.  The NPU is a military organization made up of Assyrian Christians and was formed in late 2014 to defend against ISIS. 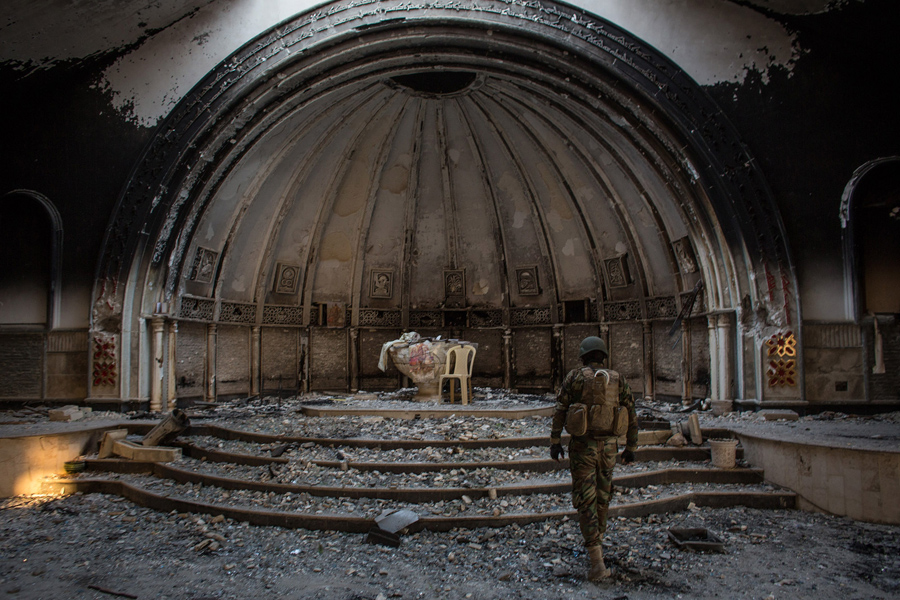 A woman looks to salvage items from the rubble at the back of a church in Qaraqosh on December 22, 2016. 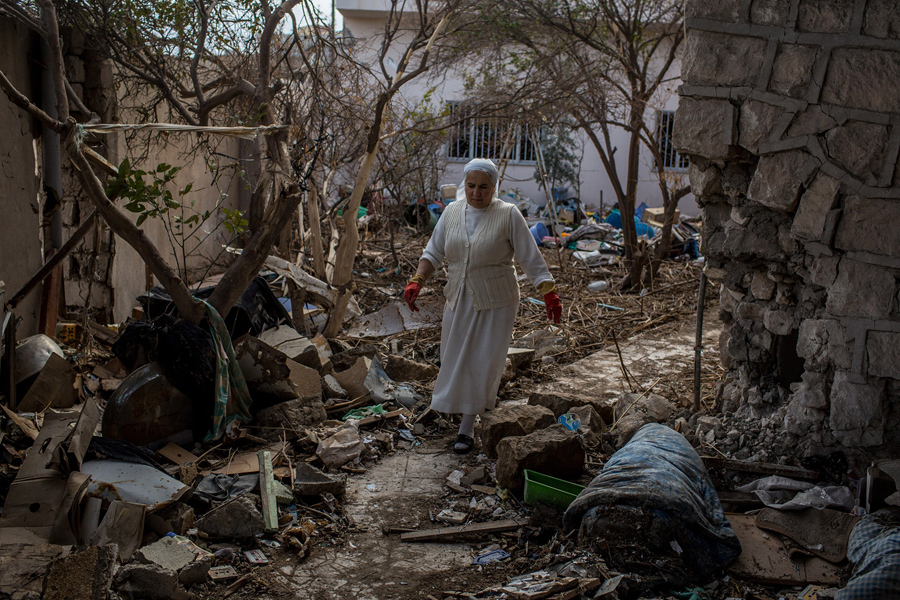 A smashed statue of Jesus Christ sits on the altar of a church burned and destroyed by ISIS during their occupation of the predominantly Christian town of Qaraqosh on December 27, 2016. 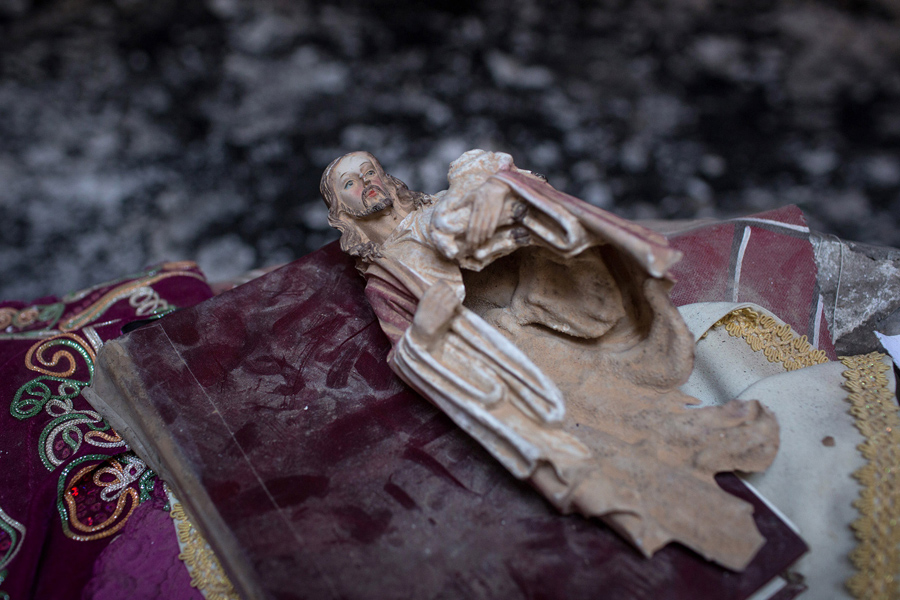 The remains of a destroyed church stand in the town of Qaraqosh on April 13, 2017. 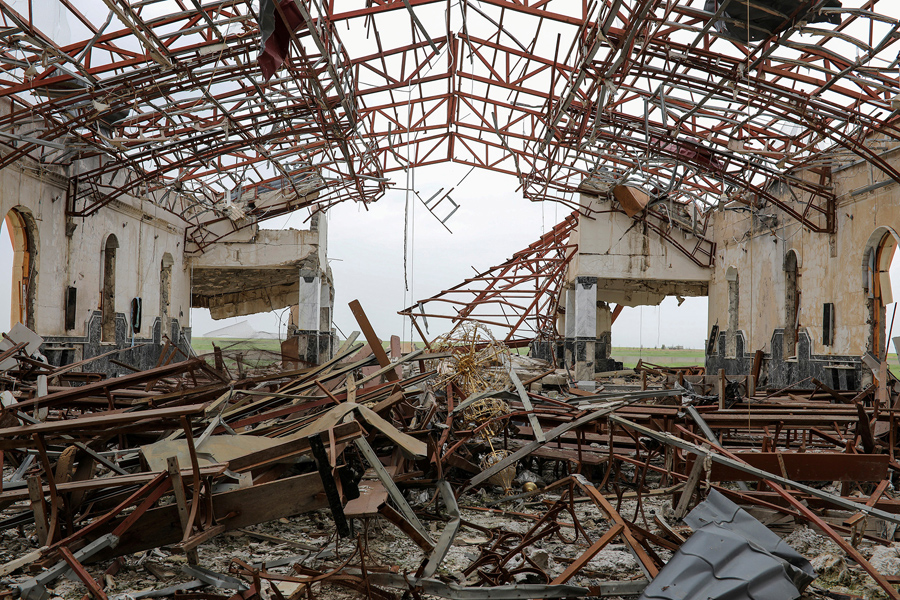 A soldier from the U.S Army stands guard next to a defaced christian statue during Christmas Day mass at Mar Hanna church in Qaraqosh on December 25, 2016. 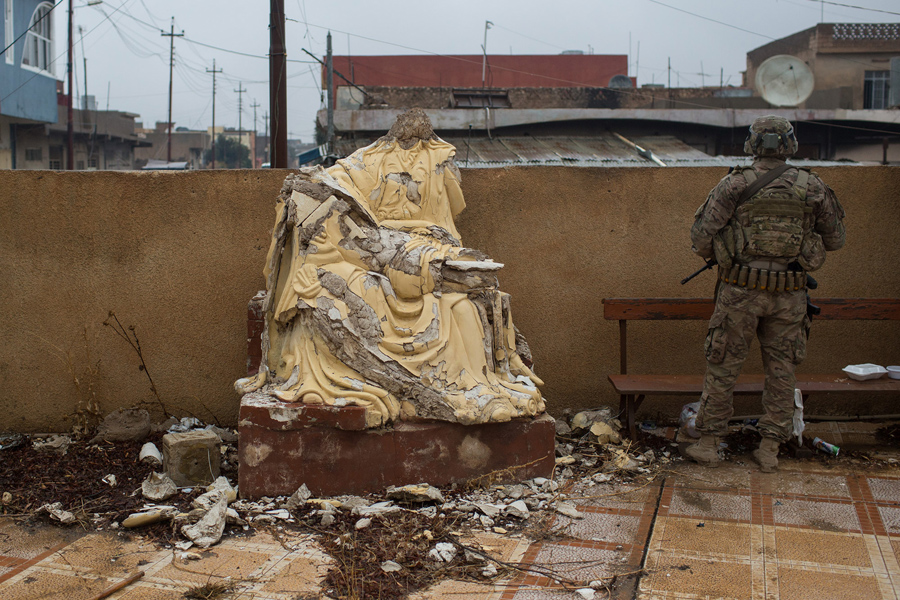 The broken cross of a Christian Church in the town of Qaraqosh on November 26, 2016, after Iraqi forces recaptured it from ISIS jihadists. 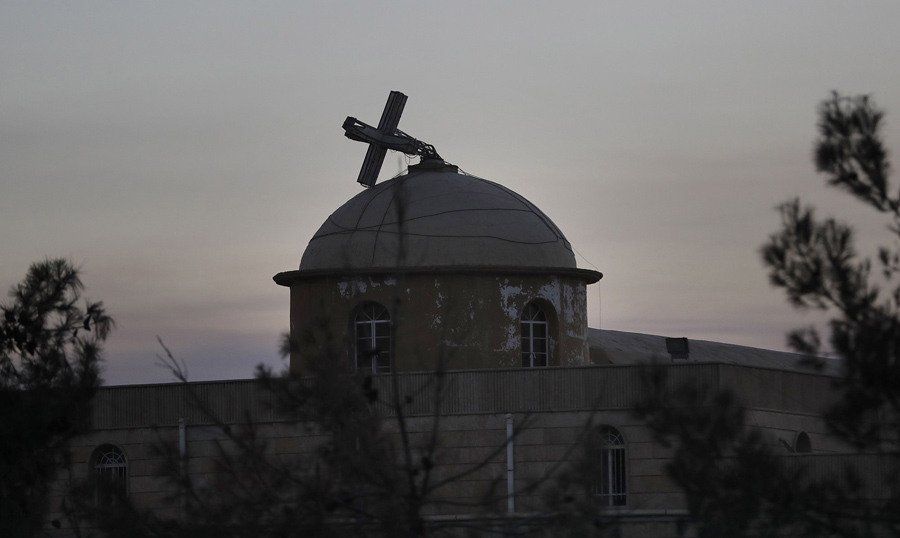 A member of the NPU rings the bell of a destroyed church in Qaraqosh on March 3, 2017. 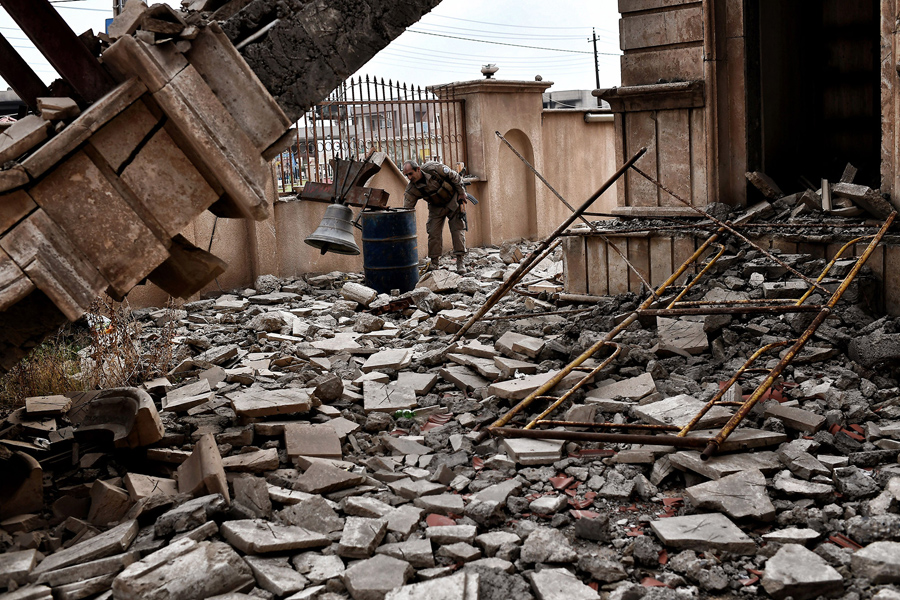 Iraqi priests hold the first mass in the damaged Grand Immaculate Church since it was recaptured on November 2, 2016. 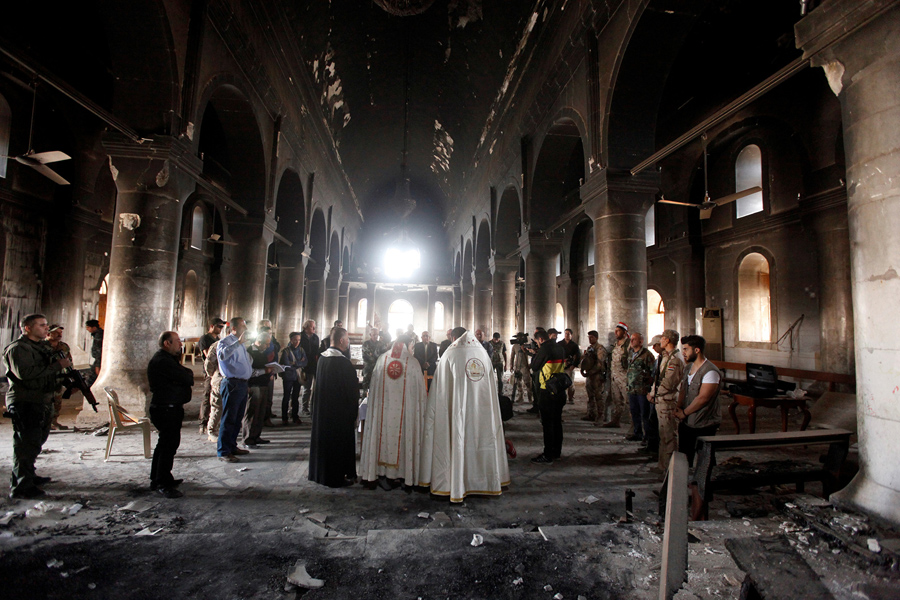 Iraqi Christians pray at the Church of the Immaculate Conception, damaged by ISIS fighters during their occupation of Qaraqosh, on November 12, 2016. 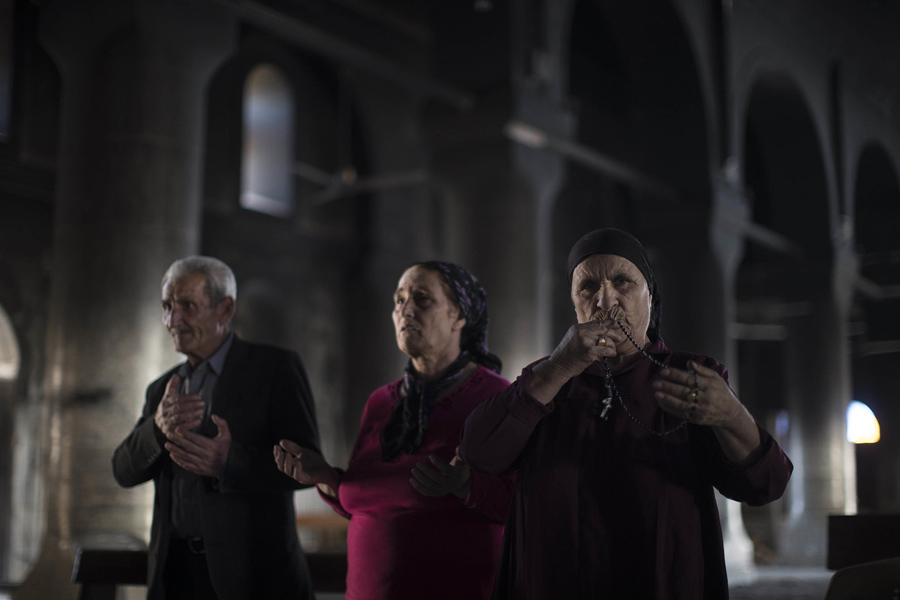 A man sweeps dust off pews in preparation for the Christmas Day mass at the Mar Hanna Church on December 22, 2016. 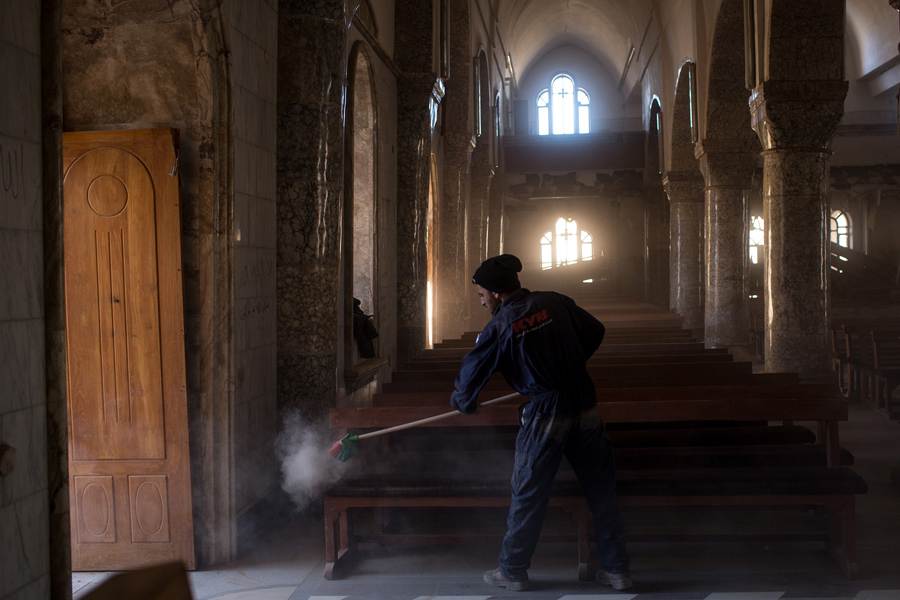 Iraqi Christian residents of Qaraqosh attend the first Palm Sunday service at the heavily damaged Church of the Immaculate Conception on April 9, 2017, since Iraqi forces recaptured it. 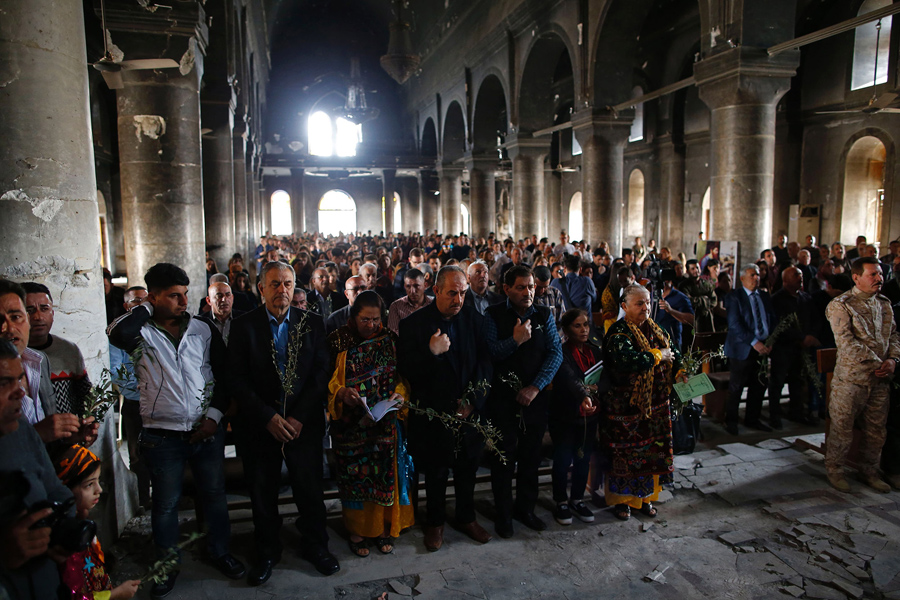 An Iraqi Syriac Christian girl smiles during an Easter procession at the Saint John’s church (Mar Yohanna) in the town of Qaraqosh on April 16, 2017. 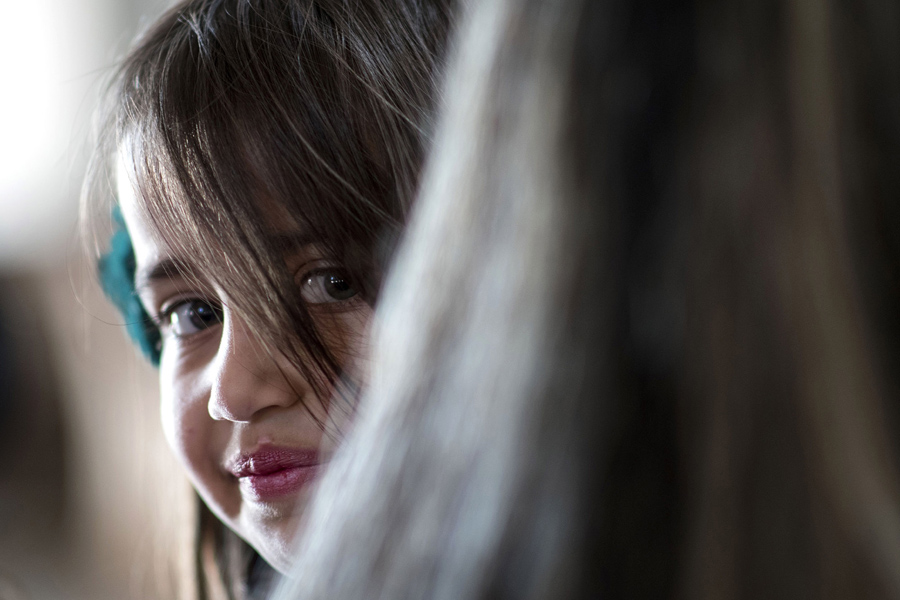 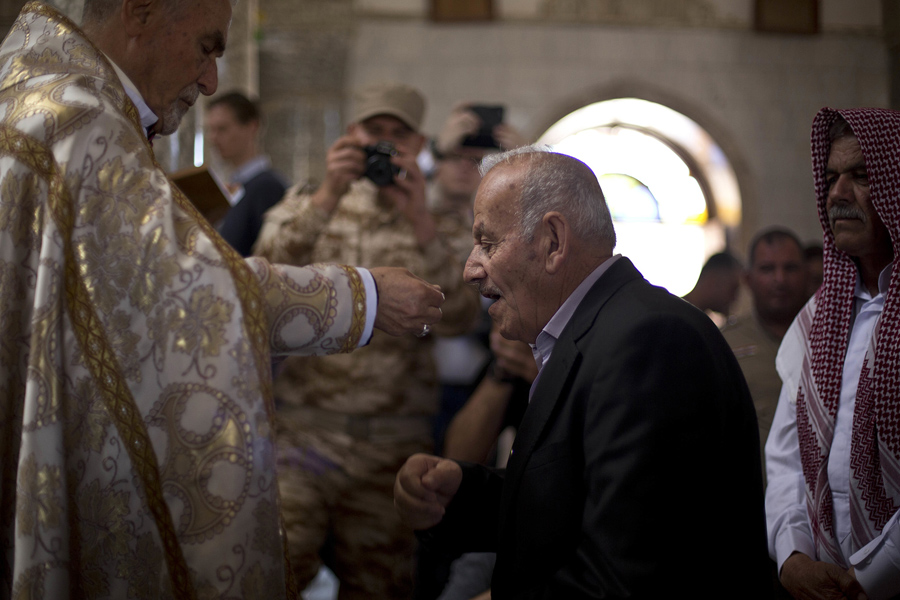 Iraqi Christian residents from Qaraqosh take part in a parade on April 9, 2017, as Christians celebrate the first Palm Sunday event in the town since Iraqi forces recaptured it from ISIS jihadists. 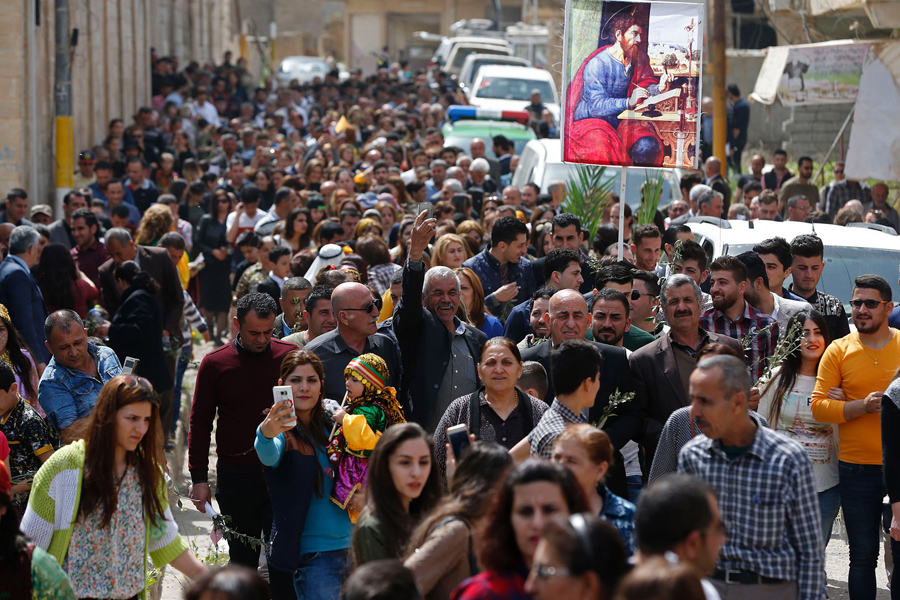 Matthew 5:10-12  —  (Jesus said), “Blessed are you when people insult you, persecute you and falsely say all kinds of evil against you because of me.  Rejoice and be glad, because great is your reward in heaven, for in the same way they persecuted the prophets who were before you.”

I Corinthians 4:12b-13a  —  When we are cursed, we bless; when we are persecuted,we endure it; when we are slandered, we answer kindly.

Almighty God, you have taught us through your Son Jesus Christ that those who follow Him may be persecuted.  Strengthen, comfort, and encourage all those who suffer harassment, violence, imprisonment, and even death for being followers of Jesus.  We pray also for those who persecute your people.  May their hearts be turned towards you through the faithful witness of those they persecute.  Protect members of the families and church communities of those who are persecuted, and bless the work and ministry of the organizations that support them.  We pray in the name of Jesus Christ our Lord.  Amen.