Best selling author and pastor Rick Warren was once invited to speak an entire population of a large prison.  He had two hours to speak, but it was out in the prison yard.  There was no stage, and Warren had to just stand on the ground like everyone else.  But Warren did have a microphone, and with that mic he could be heard by everyone.  There were about 5,000 men in the prison yard, and most were paying no attention. 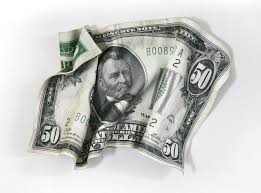 That day, 79 guys gave their lives to Christ, and they were baptized right there in the prison yard that day.  In time, the church in that prison grew to over 500 men.

Even if you aren’t in prison, you can probably relate to Warren’s little meditation on the $50 bill.  We have all sinned and been sinned against.  And yet, God still loves us and still wants us to turn to him in faith and trust.  “Amazing grace, how sweet the sound, that saved a wretch like me…”

We are products of our past, but we don’t have to be prisoners of it.

Psalm 34:18  —  The Lord is close to the brokenhearted and saves those who are crushed in spirit.

Create in me a pure heart, O God, and renew a steadfast spirit within me.
Do not cast me from your presence or take your Holy Spirit from me.
Restore to me the joy of your salvation and grant me a willing spirit, to sustain me….

My sacrifice, O God, is a broken spirit; a broken and contrite heart you, God, will not despise.

Out of the depths I cry to you, Lord;
Lord, hear my voice.
Let your ears be attentive
to my cry for mercy.

If you, Lord, kept a record of sins, Lord, who could stand?

But with you there is forgiveness,
so that we can, with reverence, serve you.

I wait for the Lord, my whole being waits,
and in his word I put my hope.