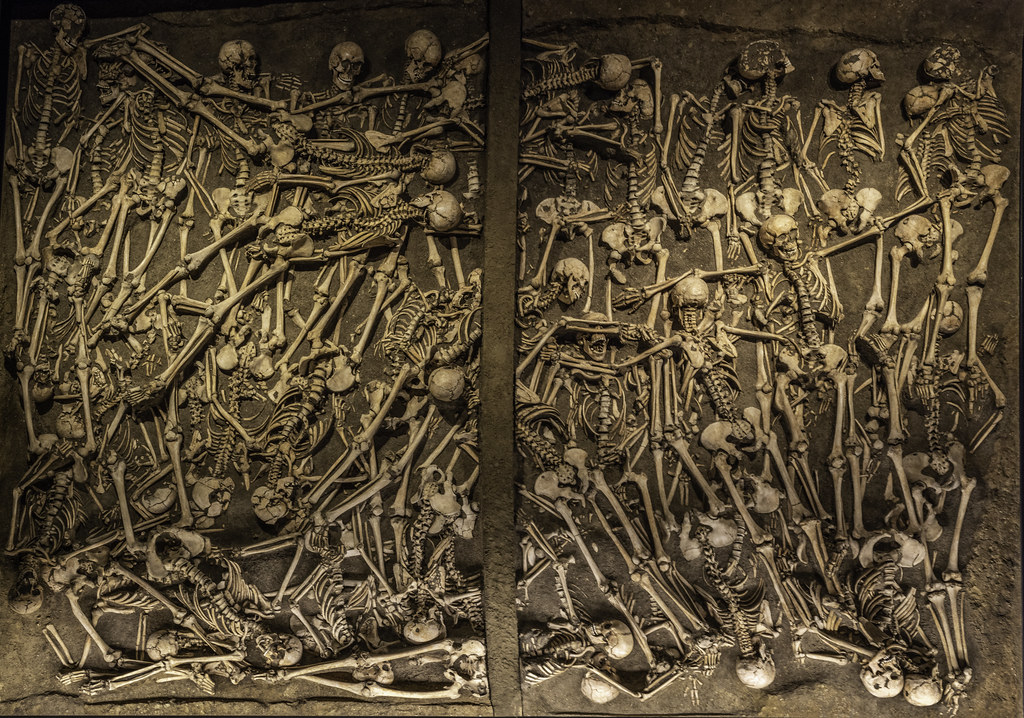 Many people have asked me if I think we are living in the end times.  After all, they say, the Bible talks about famine and war and earthquakes, and we certainly have all of that these days.  Sometimes they add, “There is always so much bad news– I don’t think it can get much worse.”

Whenever I am asked that, I think about Martin Rinkhart, the writer of the hymn Now Thank We All Our God.  Martin Rinkhart was a Lutheran pastor in Eilenburg, Germany from 1617 to 1649.  During thirty of those thirty-two years the Thirty Years War was raging all over central Europe, with Germany receiving the worst of it.  This war has been called one of the most brutal and devastating wars in all history.  Before the war, Germany had a population of 16 million.  After the war, the population was 6 million.  Ten million of 16 million Germans died in those 30 years.  If they did not die as soldiers in battle, they were as civilians hacked to death by invading armies, or, they died in famines caused by war’s the ongoing disruption of farming, or, they died by the disease that spread among fleeing refugees crowded into the towns.  Eilenburg, where Martin Rinkhart was the pastor, was a small city, but it had a wall around it, so many people fled there for safety from the armies.  Too many people and very little food led to ongoing hunger and starvation.  People would be seen in the streets fighting over a dead cat or crow.  Overcrowding led to disease, and then to plagues.  A high percentage of people died, only to be replaced by more refugees streaming in; and then many of them died.  One of the town’s pastors fled, two other pastors died, so Rinkhart was the only pastor left in Eilenburg.  At times, he was doing 50-60 funerals a day– 5,000 in all before the war ended, including that of his own wife.  Twice, he saved the city from even worse destruction by risking his life to go out and negotiate with the threatening army outside the city walls.  Finally the war ended, and one year later an exhausted Martin Rinkhart died at the age of 63.

In the midst of that war, around 1636, Martin Rinkhart wrote what has been called “the greatest hymn of thanksgiving ever written.”  It must have seemed like the end of the world was at hand, but Rinkhart still wanted to teach his children to express their gratitude to God for his blessings.  He wrote a poem for them to learn and recite together, and years later the poem was put to music.  “Now thank we all our God,” he wrote in the midst of unspeakable misery, “with hearts and hands and voices; who wondrous things has done, in whom this world rejoices; who from our mother’s arms, has blessed us on our way, with countless gifts of love, and still is ours today.”  And then, “O may this bounteous God, through all our life be near us; and keep us in his grace, and guide us when perplexed; and free us from all ills, in this world and the next.”  Only with his eye on the eternal promises of God could he have written such lines in the midst of the suffering and danger that went on and on for thirty long years.  It is a realistic hymn.  It speaks of the ills, and, of being perplexed by it all; but still, the unmistakable, dominant theme is that of thanks and praise and abiding trust.  There have been few times and places that have endured such intense misery for such a long period of time as Eilenburg, Germany during the Thirty Years War.  Yet, it was out of this misery that this great hymn was written.

Yes, the Lord might return and and the world might end today; but it won’t be because we are in the worst of times.  I am glad I am living in the United States in the 21st century instead of German in the 17th century.  Certainly, we today,  in comfort and amidst so many blessings, should also find plenty of reason to thank our God with our whole heart.

I Thessalonians 5:16-18  —  Rejoice always, pray continually, give thanks in all circumstances; for this is God’s will for you in Christ Jesus.

Habakkuk 3:16-18  —  I heard and my heart pounded, my lips quivered at the sound; decay crept into my bones, and my legs trembled.  Yet I will wait patiently for the day of calamity to come on the nation invading us.  Though the fig tree does not bud and there are no grapes on the vines, though the olive crop fails and the fields produce no food, though there are no sheep in the pen and no cattle in the stalls, yet I will rejoice in the Lord, I will be joyful in God my Savior.

NOW THANK WE ALL OUR GOD

Now thank we all our God, with heart and hands and voices,
Who wondrous things has done, in Whom this world rejoices;
Who from our mothers’ arms has blessed us on our way
With countless gifts of love, and still is ours today.

O may this bounteous God through all our life be near us,
With ever joyful hearts and blessed peace to cheer us;
And keep us in His grace, and guide us when perplexed;
And free us from all ills, in this world and the next!

All praise and thanks to God the Father now be given;
The Son and Him Who reigns with Them in highest Heaven;
The one eternal God, whom earth and Heaven adore;
For thus it was, is now, and shall be evermore.