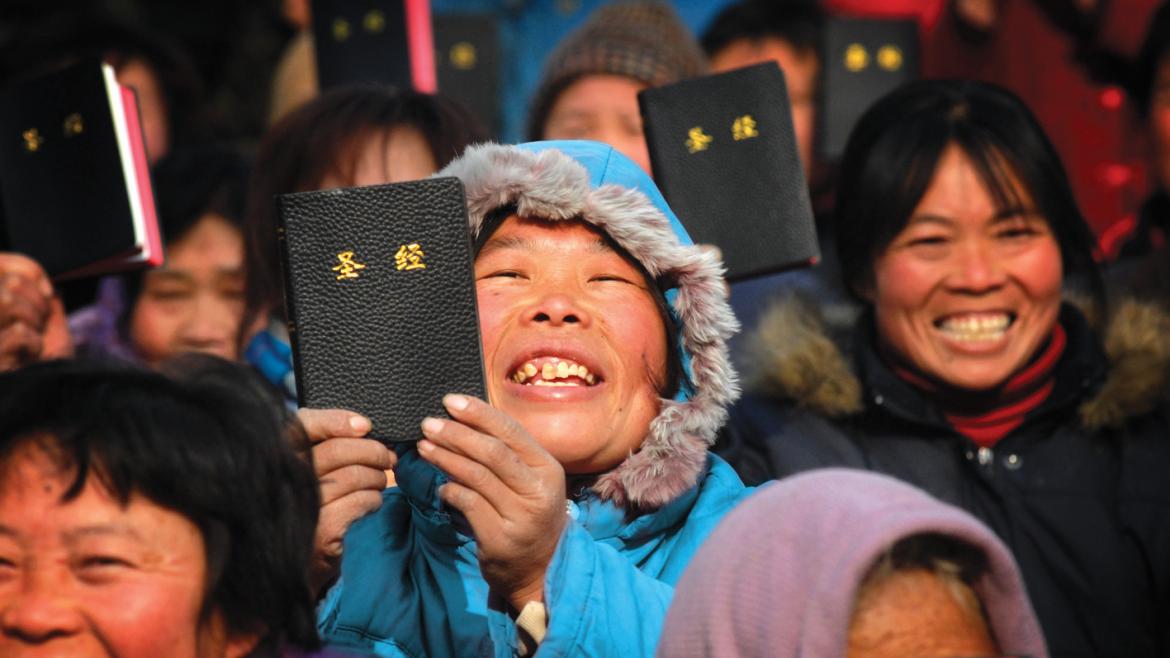 From “China’s War on the Bible:  If You Can’t Ban It, Alter It” by John Stonestreet and Roberto Rivera at:  http://www.breakpoint.org

That number, as well as the overall success of “WeDevote,” is even more remarkable given the back story, one that illustrates Beijing’s ongoing war on the Bible.

“WeDevote” is a Bible-reading and devotional app known for its “aesthetically-pleasing” design and respect for copyright laws, a rarity in China.  The month after its launch, China’s biggest app store listed WeDevote as a “Recommended App” right on its homepage.

The Communist Party’s crackdown on Christianity in recent years meant that both the app and its developers faced increasing government scrutiny.  Eventually, they were given a choice: shut down the app or face jail time.

Well, a third option, transferring ownership of the app to a Hong Kong-based company, provided a temporary respite from the ultimatum, but the government has now banned “WeDevote” from Chinese app stores.  Though the developers are actively seeking some kind of work-around, it’s a struggle to get the app in the hands of users on the mainland.

The government’s shut down of “WeDevote” is part of a disturbing trend.  Last year, China banned online Bible sales.  Of course, that doesn’t mean Bibles are unavailable in China.  Chinese publishers continue to print Chinese-language Bibles.  Some are exported, of course, but plenty remain in China.

That’s good news.  The bad news is that soon, at least spiritually speaking, Chinese-language copies of the Bible may not be worth the paper they’re printed on.  According to the Guardian, the Communist Party has plans “for ‘retranslating and annotating’ the Bible,” in order to “establish a ‘correct understanding’ of the text.”

Is there any doubt this “correct understanding” will include reinforcing the primacy of the Communist Party?  As one pastor told the Guardian, “The Chinese Communist party . . . wants to be the God of China and the Chinese people.  But according to the Bible only God is God.”  The reality on the ground is that “The government is scared of the churches,” and is cracking down on them.

Any attempt to control and re-write the Bible is a tacit admission by the Communist Party that it’s failing to eradicate Christianity.  It’s way too late for that, of course.  Depending on who you ask, there are between 60 and 100-plus million Christians in China.

Since they cannot eliminate Christianity, the Party’s goal is to pervert it, creating a version of Christianity that doesn’t threaten the Party’s claim of ultimate authority.  This demand for sole allegiance not only targets Christians, but other religious minority groups, like the Muslim Uighurs.  Anyone who believes that “only God is God” is a threat to the Communist Party and its leader Xi Jinping.

Such repression also reflects that the Party is concerned about its rule.  As many experts have pointed out, China’s stability rests on an implicit bargain: The Party promises economic growth and broad-based prosperity in exchange for the Chinese people giving up the kinds of political freedoms taken for granted in the West.

With the Chinese economy slowing down, the demographic legacy of China’s “one-child” policy, the pervasive corruption and the ever-widening chasm between urban “haves” and rural “have nots,” it’s not clear the Party will be able to hold up its end of the bargain.  More and more, the Party is looking like yet another would-be “god” that has failed its worshippers.  We know, given China’s tumultuous history, the sort of bloodshed and chaos that comes from disappointed worshipers there.  We also know, given the inherently religious nature of human beings, that such dissatisfaction will only catalyze the growth of the Church and the spread of the Gospel.

That means we should pray that God’s Word will prosper in China . . . and that God will protect all those who preach it.

Matthew 5:10-12  —  (Jesus said), “Blessed are you when people insult you, persecute you and falsely say all kinds of evil against you because of me.  Rejoice and be glad, because great is your reward in heaven, for in the same way they persecuted the prophets who were before you.”

I Corinthians 4:12b-13a  —  When we are cursed, we bless; when we are persecuted,we endure it; when we are slandered, we answer kindly.

Almighty God, you have taught us through your Son Jesus Christ that those who follow Him may be persecuted.  Strengthen, comfort, and encourage all those who suffer harassment, violence, imprisonment, and even death for being followers of Jesus.  We pray also for those who persecute your people.  May their hearts be turned towards you through the faithful witness of those they persecute.  Protect members of the families and church communities of those who are persecuted, and bless the work and ministry of the organizations that support them.  We pray in the name of Jesus Christ our Lord.  Amen.