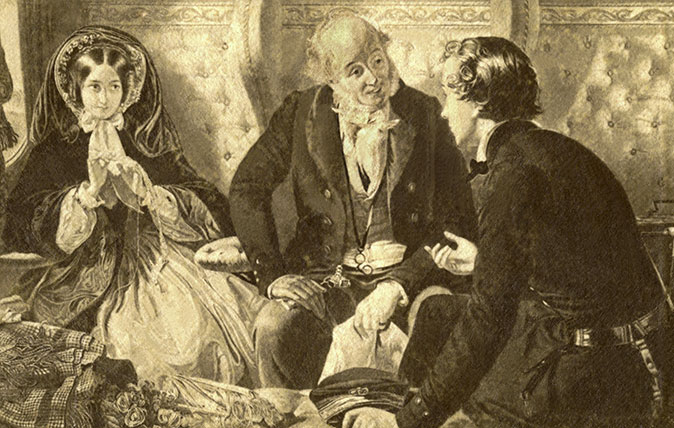 “Permission to marry your daughter, sir?”

One day many years ago, a young man wanted to marry a certain young woman.  The woman insisted, as was customary at the time, that the man ask her father to grant them his permission to marry.  The young man knew that the girl’s father was a good and kind man, but he was still very nervous about asking him this important question.  Finally, he talked to him. “Sir,” he said, “I would like to request your daughter’s hand in marriage.”

The older man looked at him sternly and without speaking for a long time.  Finally he said, “Meet me here at my home at 3:00 tomorrow morning.  I would like to ask you a couple questions to see if you would be a suitable husband for my daughter.”

At precisely 3:00 the next morning, the young man knocked on the door. The servant showed him into the living room, where the young man sat down and waited– and waited and waited. For five hours he waited. Finally, at 8:00 the older man walked in and proceeded to ask his questions.

“Good,” said the old man.  “Do you also know something about figures?”

“That’s splendid,” said the man’s future father-in-law getting up to shake hands.  “I would be most pleased to grant you my daughter’s hand in marriage.”

The bewildered, but pleased young man left, and the girl’s father went in to tell his wife the news that their daughter would indeed be marrying that fine young man.  “But how could you tell anything after such a short conversation?,” asked his wife.

“Well,” said the husband, “it wasn’t only what he said, but it was also what he did.  First of all, I was testing him on self-denial.  I told him to be here at 3:00 in the morning.  He left a warm bed and came out in the cold without a word of complaint.  Second, I tried him out on courtesy; and he was courteous enough to be here right on time.  Third, I examined him on patience.  I made him wait five hours to see me.  Fourth, I was testing him on irritability and resentment; and he did not show any sign of it, and did not even question my delay.  Fifth, I tried out his humility.  I asked him questions that a five year old could answer and he showed no pride or indignation.  And I also found out that he knows how to look for the best in people.  Last night I asked our daughter how he responded to having to come here at 3:00 in the morning.  She said he told her that he knew her father was good man, and even though the appointed time was unusual, he trusted there must be some good reason.  I found out a great deal about that young man, and I am convinced he will make a good husband for our daughter.”

Even though the father had intentionally set up that unpleasant situation, it did serve to show him how the young man would respond to the many irritations that would inevitably be a part of marriage.  The young man responded with grace, trust, respect, courtesy, and patience, even though he did not understand what was going on; and that told the father everything he needed to know.

In I Corinthians 13 we read that love is patient and it is kind.  Love also, it says, bears all things and endures all things.  Love, it goes on to say, is not irritable, it is not resentful, and it is not arrogant or rude.  And love rejoices in the right and does not rejoice in the wrong; or we might say, it does not insist on looking only for the bad in every situation and person, but looks also for the good.  Love will give another person the benefit of the doubt, as the young man did for his fiance’s father.

When people are irritable, resentful, arrogant, and rude, those negative qualities described in I Corinthians 13, then conflict will always be present, even when problems are small.  That father knew that in a good marriage one needs to think the best, not the worst of their spouse, and to be willing to give them the benefit of the doubt.  There would be many times that young man would have reason to be irritable, but would need to be patient; times he would have reasons to be resentful, but would need to be understanding; times he could be offended or insulted, but would need to be gracious and have the ability to overlook a wrong done.

I Corinthians 13:4-5  —  Love is patient, love is kind.  It does not envy, it does not boast, it is not proud.  It is not rude, it is not self-seeking, it is not easily angered, it keeps no record of wrongs.

I Corinthians 13:6-7  —  Love does not delight in evil but rejoices with the truth.  It always protects, always trusts, always hopes, always perseveres.

I Corinthians 13:13  —  And now these three remain: faith, hope and love.  But the greatest of these is love.

By the power that Christ brought from heaven, mayst thou love me.
As the sun follows its course, mayst thou follow me.
As light to the eye, as bread to the hungry,
As joy to the heart, may thy presence be with me,
Oh one that I love, ’til death comes to part us asunder.